The Original Email Templates for Freelancers in Sticky Situations - Over 125 templates!

The coupon code you entered is expired or invalid, but the course is still available!

That angry email from your client is gnawing at you…
but you don’t know how to respond. 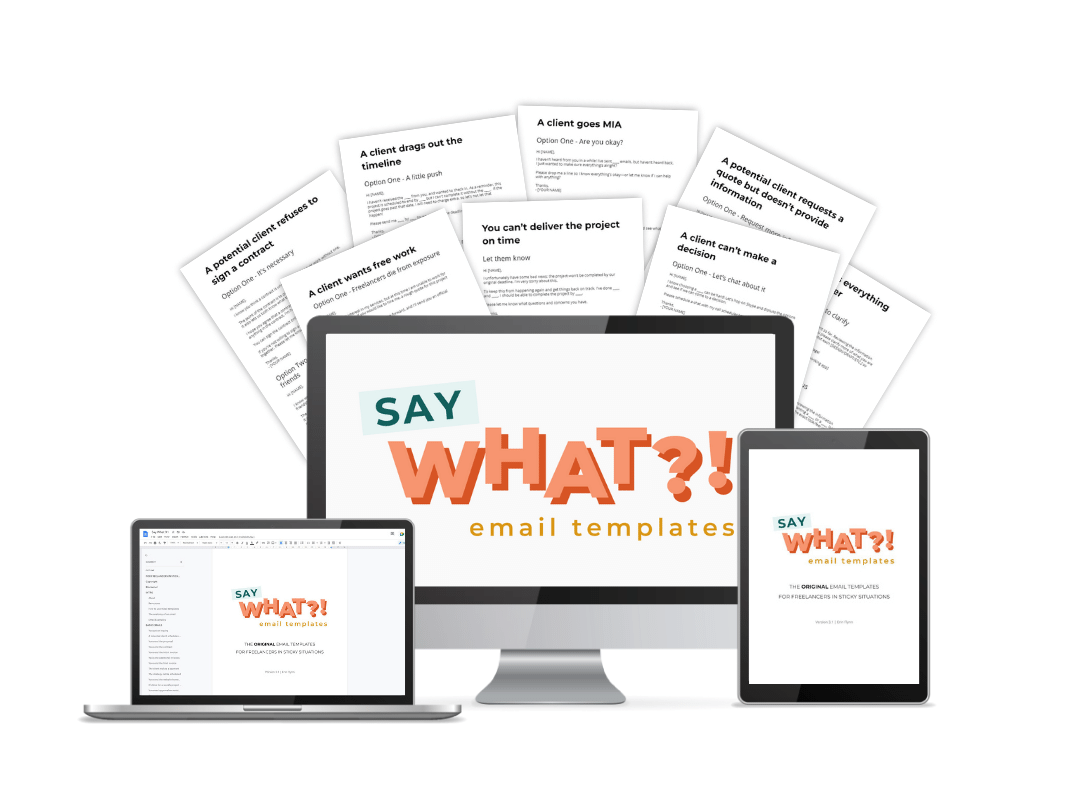 You want to sound professional, but firm, and stand up for yourself while coming up with a solution that will work for you and your client–but you can’t keep the emotion out of your response.

That’s where Say What?! comes in. These simple, copy and paste email templates can be tweaked to fit any difficult client situation and take the drama out of the equation. Delivered immediately upon checkout, this Google Doc is easy to use and will save you hours of stress agonizing over how to compose the proper response. Simply put, these email templates for bad clients turn problem situations into simple solutions.

Say What?! will help you…

Not just for web designers!

Past versions of this product have been geared towards web designers, but now Say What?! has been re-written to work for ALL freelancers!

Say What covers what to say when...

With multiple responses per scenario, you have over 129 templates to choose from!

Wondering what the book is like? Here’s one of the scenarios! Simply choose the answer you want, fill in the blanks, and send to your client!

What to say when a client wants more revisions than outlined in the contract:

Option One - Add on more revisions

As outlined in our contract you get ____ revisions to each ____. Right now, we’ve already done ____ revisions. I’m happy to keep working with you until we get it just right, but will need to charge extra to cover the time spent on each one.

I know committing to a ____ is hard! But we’ve already hit/exceeded the number of revisions for this project as outlined in the contract. At this time I’m unable to continue revising the ____.

Please choose one of the options I’ve already presented by ____ so that we can move forward with the rest of the project.

Option Three - I’m over it.

We’ve already hit/exceeded the number of revisions for this project as outlined in the contract. At this time I’m unable to continue revising the ____ and think it’s best for you to work with another designer.

I have attached the files and all work as outlined in the contract. You may use them as-is or another [DESIGNER/COPYWRITER/ETC,] may be able to bring your vision to life. 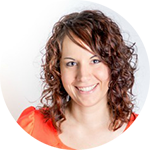 I had a client go completely MIA after I finished making some changes to her website. I sent her final invoice and didn't here a darn thing for over a week. I purchased your email templates this morning, picked one that fit the situation, and I had an apology and paid invoice within 2 hours. Thank you!! :)

Say What?! takes the guesswork out of how to craft the perfect email and presents various options which are clear, direct, and professional. This ebook is my new business bible and one that I treasure so dearly!

This e-book is awesome! It makes things so much easier when I get stuck on what to say in my emails! 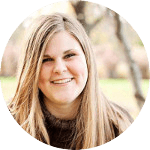 This killer resource empowers designers to respond efficiently and appropriately to potentially *facepalm* situations with clients. Erin’s scripts take all the guesswork and stress out of the balancing act between being warm and professional and not letting clients take advantage of you. This is a must-have for any freelance designer! 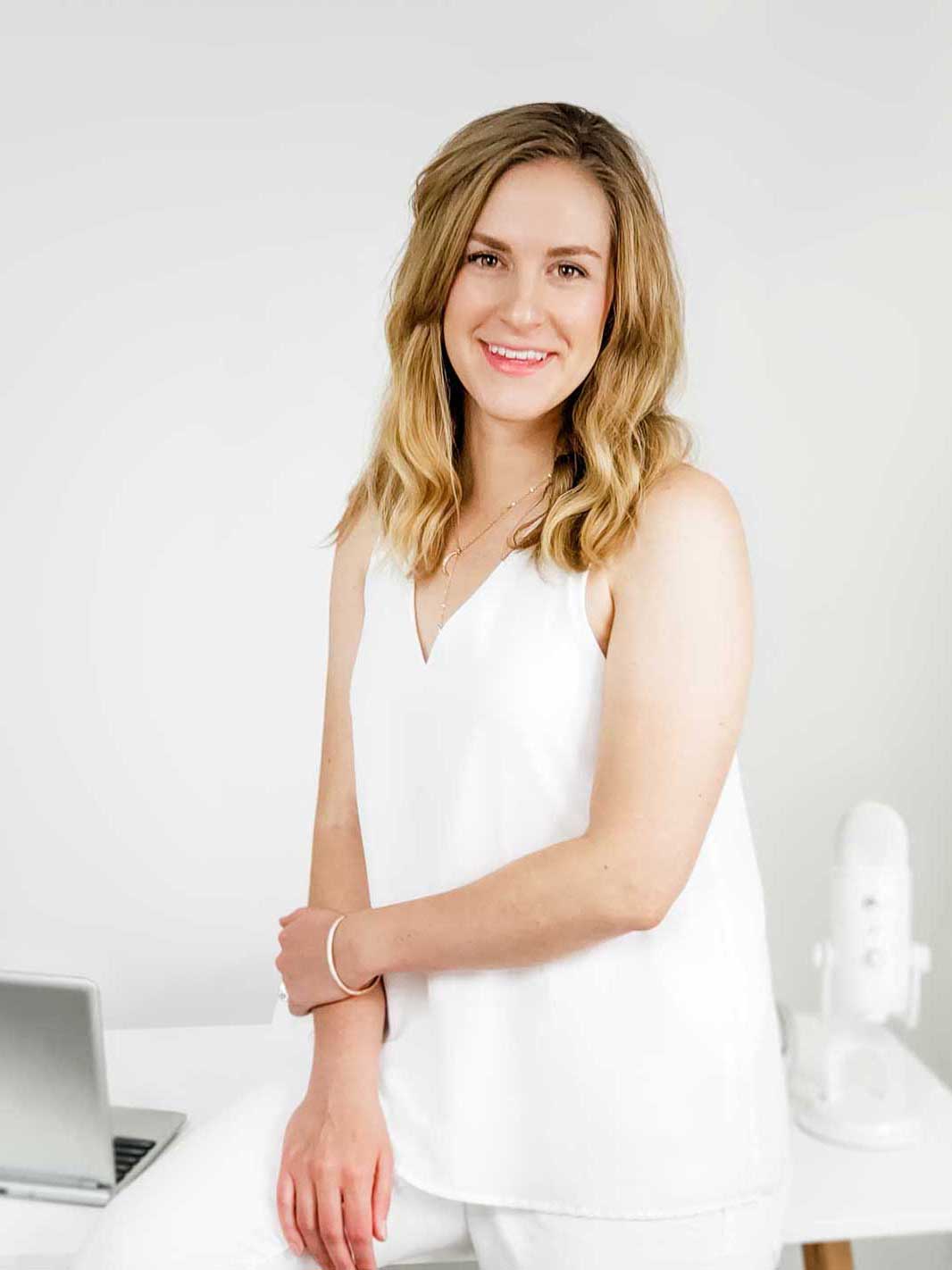 Not so long ago I was like you. Working constantly. Answering phone calls from clients on Sunday mornings. Staying up late to meet deadlines. Dragging my computer with me on vacation. Constantly checking my phone. Checking emails at my own damn wedding.

It took me several years to figure it out: that I didn't have to chase every shiny object, do all the things, or even hire a team to run a successful business.

By getting clear on my own unique vision of success and cutting out everything in my business that wasn't moving me in the right direction, I was able to scale my business to over six-figures a year, while working less than 20 hours a week.

Through my Successfully Simple® Framework, I have helped hundreds of creative entrepreneurs scale their businesses while cutting their work hours. But more importantly, I've helped them get clear on what success means to them, and design their business to help them reach their vision of success as quickly as possible.

I want to help you too.

Is this a book?
This is a Google Doc of templates! NOT a course, book, or workshop.
Are these email templates just for web designers?
Nope! These templates are designed for ALL freelancers!
What if I am unhappy with the templates?
That'd be a bummer, but because this is a Google Doc that you will make a copy of, refunds are NOT possible.
When do I get the templates?
Right away! After purchase you'll be able to login to your member area where you can create a copy of the templates and start copy+pasting immediately!
How long do I have access to the templates?
How does lifetime access sound? After purchasing, you have unlimited access to the Google Doc and can put it on as many devices as you own. You may not share it with anyone else.

Erin has put together a timeless collection of scripts useful for any designer that works for clients. I have been working for clients providing graphic and web design services for over 8 years and I have collected together six or seven or so scripts. Erin has a whole boatload of them here. And they are all essential. An amazing resource! 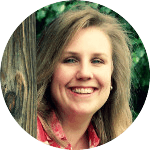 This book has many excellent examples, is clear and direct with a simple copy and paste format. Erin has a great sense of humor and a firm grasp of the frustrations web and graphic designers face with clients. The ebook left me wanting to read more of what she had to say! Worth the purchase many times over. Thank you for such a great resource, Erin. 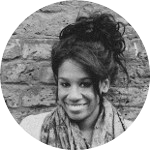 Say What?! made handling those less-than-fun client interactions a breeze and I’m so happy that Erin’s put this invaluable guide together! Erin has allowed me to spend less time fretting over emails and more time on the important stuff: producing great work! Thanks, Erin! 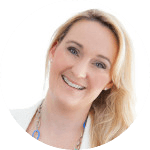 I just used the MIA script for a client I hadn’t heard from in a month… and guess what? They actually replied! Woo hoo!

Ready to grab your templates?

Disclaimer: YOU are solely responsible for your success and results. Your results are dependent entirely on your effort, motivation, and commitment. We do not make guarantee your success or achievement of particular results. By purchasing our products or programs you agree that that is no guarantee for any specific outcome, and that you follow any instructions, advice, strategies, or other content or communications at your own risk. You agree to hold harmless any and all current or past owners, employees, or contractors of EEF LLC, as well as members of our communities that you may interact with. You take any and all advice at your own risk. You understand that with any business endeavor there is inherent risk, including loss of capital or customers, and you assume all responsibility for any risk. See full T&C.